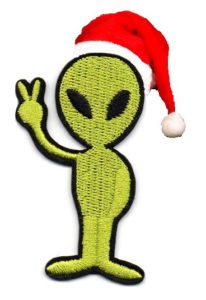 HAPPY CHRISTMAS TO ALL STARVISTORS

Humans are truly special creatures.  Our speech ability, our upright position, our mastery of fire, our amazing and creative brains are examples of what differentiate us from other species.  Those have allowed us to change our world dramatically (for better or worse) and even leave the planet to explore our solar system.

One of the most popular question today is whether or not we are alone in the Universe. Our space exploration has shown us how infinite the universe is.  The notion of multiverses is gaining momentum.  Experts estimate that there are between 100 to 200 billion galaxies in our universe alone and they keep on discovering.  This number puts our understanding of the cosmos into perspective and it becomes almost arrogant to think we are the only intelligent form in this big space.

UFOs are regularly being spotted in our skies but whether these are just weather balloons, outcome of a vivid imagination or actual aliens visiting Earth remain unclear and is open for debate. The fascinating and less known fact is that this is not just a modern phenomenon but ancient tribes and elders going back millennia have spoken about visitors from the stars. Visitors who brought with them knowledge and when they left Earth, promised mankind to return.  Religious books also reveal breathtaking depictions of angels, giants and how the Nephilim, sons of God, came into the daughters of men, and bore children to them.  Why can we accept some aspects of the Holy books and disregard others which don’t suit us?!

Is evolution linear as the Darwinists would like us to believe?

The idea that civilizations progress from a primitive state to a  more advanced one seems to be a fallacy that evolutionists try to apply to history. If we were to abandons evolutionist nonsense, and we start looking at the historical findings with an unbiased mind, we find people. ancient cultures who used highly advanced technologies. Remains left from ancient Egypt, the Mayans and the Sumerians indicate that branches of science such as electricity, electrochemistry, electromagnetics, metallurgy, hydrogeology, medicine, chemistry and physics were used to a considerable extent well before what mainstream history teaches you.

In this blog, I will share my research on all aspects of extra-terrestrial existence.  We will look at traces and fingerprints left by the “Gods” throughout human history.  We will examine the true nature and purposes of Megalithic sites around the world: who built the Pyramids of Giza in Egypt? And what was their real purpose? What can we learn from the site of Machu Pichu and other sites in Peru? Ancient masonry with stones weighing over 1,200 tonnes remain a mystery.  Museums around the world showcase strange and unexplained artifacts: could they really come from a different world? We will dive into mythology and how stories of flying vehicles and humanoid beings interacted with people, are being transmitted from one generation to the next. Art will also become a subject of research as it is by far the oldest form of recorded history. Even before written language was invented, humans were drawing images of what they saw.

In the 1997 book from Colonel Corso “The Day After Roswell”, Corso reveals that some material recovered from crashed spacecraft were used for reverse engineering purposes.  Are nightvision, fibre optics, microchips, anti-gravity, shape shifting materials examples of extra-terrestrial technology?

If there was no grounds for aliens existence, why would governments,private companies and even the Vatican spend billions US$ exploring space, Mars and launching bigger telescopes into Orbit searching for water and life forms?  Scientists now believe that in the past, rivers and oceans have covered the martian land. Where did all of the liquid water go? Why? How much of it still remains? We will therefore look at Scientific research and how their quest for intelligence progresses.  Is it in our DNA to return to space and look for our origins?  Could our needs for space exploration be an actual “ET, go home” call?

This site attempts to present research findings in a factual manner, free from emotion (I’ll try), political and religious agenda but through a free thinking lens.